A presentation at Electronic Arts in 2006 on Filmic Tonemapping, a technique from film that became very applicable to games with the addition of support for HDR lighting and rendering in graphics cards.

Slides are available below.
END_OF_DOCUMENT_TOKEN_TO_BE_REPLACED

Abstract:
Rendering resources are by definition constrained and yet the task of rendering many objects at high quality is frequently encountered in the effects industry. Breaking up scenes into renderable pieces, or passes, is a common approach to rendering large scenes. To achieve the quantity of photo-real effects in frame that were required by the scripts of The Matrix Reloaded and The Matrix Revolutions, mental images and ESC Entertainment developed a system for rendering and automatically compositing many passes. The system we developed has the key advantage that it takes as its compositing primitive not the pixel but the sample.

The full writeup and slides are available below
END_OF_DOCUMENT_TOKEN_TO_BE_REPLACED 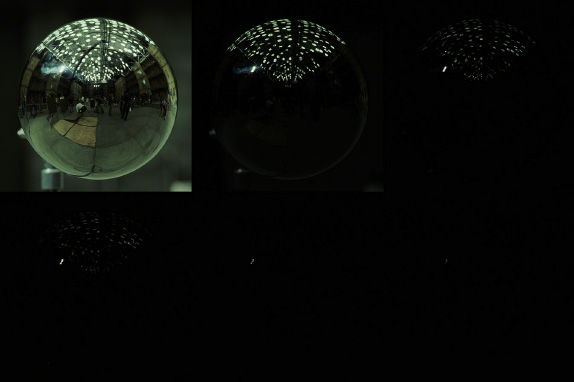 The Siggraph 2003 presentation on the ESC Lighting Reconstruction Toolkit, an Image-Based Lighting approach used on The Matrix Reloaded and The Matrix Revolutions are online here.

Abstract:
The demands of photo-realism required of the effects for The Matrix Reloaded and The Matrix Revolutions led us to create a system for directly and accurately reconstructing real world lighting environments. The Lighting Reconstruction Toolkit builds on research in the area of Image-based Lighting and extends current techniques to enable the reconstruction of lighting that more closely matches the real world.

The full writeup and slides are available below
END_OF_DOCUMENT_TOKEN_TO_BE_REPLACED

The ACES project includes includes a XML-based LUT format known as the “Common LUT Format”, or CLF. The format is documented here and here.

In support of the ACES 1.0 release, a Python reference implementation for the format was created. This includes support for all of the features in the specification, some of Autodesk’s proprietary extensions as well as a few small extensions of my own.

The github repo is here: CLF

Duiker Research Corp., creator of the Color Symmetry plug-in suite, will be announcing Color Symmetry 2.0 from Booth #1538. Version 2.0 rolls out on a number of new capabilities that make it possible to create and emulate production looks, accurately view color and correctly exchange color data across multiple film- and emerging all-digital production pipelines in motion pictures, television, commercials and games. This includes introducing support for RAW digital acquisition workflows as well as a comprehensive range of industry-standard LUTs.

Color Symmetry is a set of plug-ins and small applications that solves the modern workflow challenge of being able to see and handle color consistently in animation, graphics, visual effects and post-production systems, including 2D and 3D software. Color Symmetry also lets lets users author, share and properly use film and created production looks directly within their everyday tools.

For further information, visit www.colorsymmetry.com, or Booth #1538 at SIGGRAPH 2008.

With Color Symmetry, Custom Looks Can Now Be Created and Viewed Across Popular Post-Production Tools

“Color Symmetry 1.1 solved the problem of emulating film in the digital workflow,” said Haarm-Pieter Duiker, founder of Duiker Research. “Version 1.5 takes the next step by allowing users to create and accurately pass on their own Film Looks. Film Looks can be created and viewed interchangeably within industry-standard applications by various different collaborators — DPs working in Photoshop, graphics design firms working in After Effects, film companies using Shake, Nuke or Fusion and film finishing houses using Scratch or Framecycler.”

Color Symmetry addresses the needs for film look emulation, color space conversion and color operations in a single package that is consistent across applications and platforms. It solves a fundamental digital post-production challenge by allowing artists creating and rendering shots and elements to see the images as they would appear on film. It offers Identical Color Handing across vastly different software packages, color spaces and user platforms and even allows consistent work between the logarithmic world of 2D live-action color imagery and linear world of 3D lighting and floating-point high-dynamic color range.

Early adopters of Color Symmetry include such companies as Evil Eye Pictures in San Francisco, The Lab VFX R&D in Mexico and Sony Entertainment Europe.

Let us know how they work out for you

We’re trying to make things a bit more dynamic around here. To that effect, we’ve reorganized the site and added a few features. The motto for the company has always been “Dedicated to creating technology that enables people to make better visual effects.” so hopefully the new site helps us get the word out a little quicker in that effort.